No Comments
Hi readers, do you know about C# Programming Language if you know nothing about C#, no need to worry about that, we will tell you everything about C# language, advantages of C# language and features of it.

Our computers run on predefined tasks and programs and these programs can be written in various languages like C, C++, Java, and the latest programming language C#. You know this thing, the computers don’t work itself, they work according to the programmer’s code,

What is a C# programming language?

C# language is pronounced as C sharp language. It is a modern, general-purpose, object-oriented programming language that is developed by Microsoft within its .Net and initiative led by Andres Hejlsberg.

The C# programming language is a very easy language to learn. It is entirely based on the C and C++ languages.

This means to say, if you have a basic knowledge of C and C++ language, so you can easily understand this language. However, the syntax of C# language is highly expressive, but yet it is also simple and easy to learn. Anyone can recognize the curly-brace syntax of C# instantly who knows about the C, C++ or Java language.

Do you know what is the best side of the C# language as compared to Java and C++ language? It simplifies many of the complexities of C++ and provides powerful features such as null-able value types, delegates, enumerations, lambda expressions, and direct memory access which are not found in Java.

Let’s focus on essential properties of c# language include:

There is no type-conversion so that data loss is not possible. That’s why the developer can write safe code, besides this C# language supports null-able and non-nullable types.

To develop C#, Microsoft has only an aim to developers can learn easily and can support modern functionality.

This programming language also helps in business because we can develop software for various platforms like ios, android, and window or web.

C# language lead by Microsoft instead of this there open source project and tools are available on GitHub and that’s why c# is growing fast just because of open source, there are many communities active for language improvement.

Microsoft had built this language earlier only for windows application but after that, however, we have begun to use this language for the console, android, and ios, besides, C# started to be used with machine learning software.

Before bending towards the advantage of C#, let’s discuss the history of c# language;

Hejlsberg is a principal designer of C# in Microsoft company also he made various languages like Turbo Pascal, Embarcadero Delphi, and Visual J++. At that time he said in an interview that C++ and Java Pascal languages don’t have fundamentals of the Common Language Run time, that’s why we made C# language.

Now we will see the version of C# programming language. 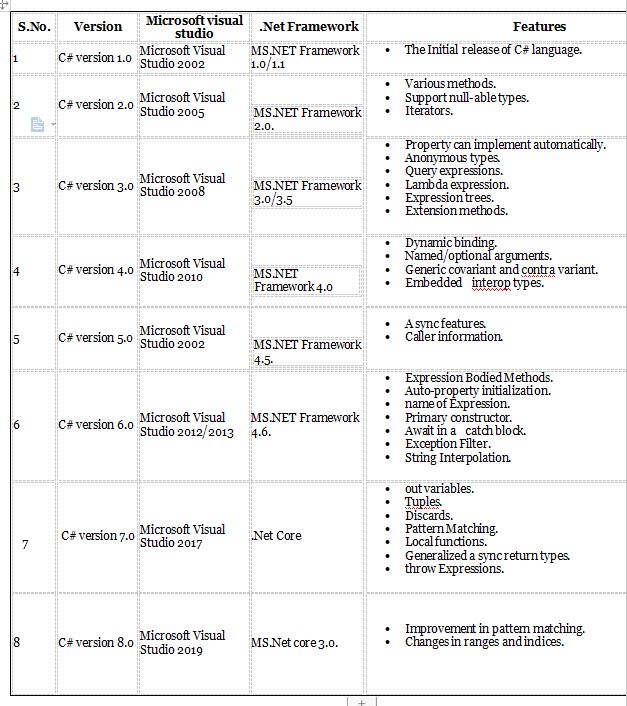 The major advantage of c# language that an application which written in c# can deploy in any operating system like android or ios, windows, or cloud platform.

There are many important features of C# language that make it more useful and unique compared to other languages.

C# language is very fast, its compilation, and execution time is too quick.

C# is a simple language. It gives a structured approach to breaking the problem into parts. Also, It has a rich set of library functions and data types. C# language code does not require header files. Its code is written inline.

However, it is too difficult to manage if the code grows as project size grows. Besides, C# programming supports Data Encapsulation, inheritance, polymorphism, interfaces.

C# language is one of the modern programming languages because it is based upon the current trend. However, it is very simple, powerful for building scalable, interoperable and robust applications.

C# language is type-safe code that can only access the memory location and has permission to execute. Therefore, it improves the security of the program.

Interoperability is the process that enables the C# programs to do almost anything that a native C++ application can do. In brief, language interoperability is the ability of code to interact with code that is written using a different programming language. It can help maximize code reuse and, therefore, improve the efficiency of the development process.

C# language provides support for using COM objects, no matter what language was used to author them. However, it also supports a special feature that enables a program to call out any native API.

C# language is a computerized scalable and update-able programming language. However, one important thing is, that to update your .Net framework. you have to kill your old files and update them with the new one.

In other words, to solve large problems C# programming divides the problem into smaller modules called functions or procedures each of which handles a particular responsibility that’s why C# language called a structured programming language.

C# language is rich in the library. So that it provides a lot of inbuilt functions that make development fast.

In the above section, we talked about the C# programming language, now we discuss the advantages of C#.

You can also read about other programming language click here.

In the above section, we already discussed that C# programming language is a pure object-oriented language so that it allows you to create modular maintainable applications and reusable codes. This is one of the biggest advantages of C# over C++ languages.

The most important requirement for C# programming is the NET framework. Your machine has to install the NET Framework to run your application well.

Avoid the problem of memory leak.

The major benefit of C# language is its strong memory backup. C# programming language contains high memory backup so that memory leakage problem and other such types of problem is not occurring as it happens in the case of C++ language.

C# language has a rich class of libraries that make many functions easy to be implemented. The C# programming language influences most of the programmers of the world and has a history in the programming world.

An application written in .NET will have better integration and interpret-ability as compared to other NET Technologies. C# programming runs on C.L.R that making it easy to integrate with components written in other languages.

The maintenance cost is less and is safer to run as compared to other languages. C# language can develop iOS, Android and Windows Phone native apps, with the help of the Xamarin framework.

It is pretty easy to pick up and work productively with a working knowledge of languages like C, C++, Java because its core syntax is similar to C-style languages.

You can buy support from Microsoft in C# programming. If any issue occurs you can solve it with the support of Microsoft.

C# programming has features like Properties and Indexers which are not available in Java language.

It can develop iOS, Android and Windows Phone native apps, with the help of the Xamarin framework. However, it is also greatly used for developing a Windows app (Mobile, Desktop).

C# language is the most powerful programming language for the .NET Framework.

We already discussed that .NET applications work on Windows platforms only and Microsoft keeps retiring support for old Windows platforms. So always you would need to upgrade your .Net framework.

But after the upgrade, this could be an advantage or a disadvantage as well. Hence, it always motivates you to work hard and excel in your field and this is a good thing in my point of view.

Suggest: you should also learn Binary Tree in Data Structure.

In the world of committal to writing and programming, the importance of a useful community on that you’ll be able to rely merely on can’t be immoderate. Also, there should be a platform to exchange ideas for better programming.

And it has happened, one such community of useful programming specialists is found on Stack-overflow. Where you can ask questions about C# coding mistakes and any other query. also, you can answer any posted question.

Here are some advantages of C# language over Java language that makes it more useful than Java.

Suggest: You should also learn Binary Search in Data structure

For developing games, Developers have widely used C# language Using the “unity Game engine”(UGE). UGE is the most popular game engine Nowadays. Those games are the top third in-game industries they use to make games in C# language. UGE also use VR. And today industry likes VR(virtual reality) games. And that’s why game developers prefer for C# language.

C# language is very famous among developers. Features of C# languages are very useful for the programmers. It contains most features that a programmer wants. Game developers highly use this language to develop a game using the Unity game engine, which is the most popular today. Of course, there are many advantages of C# language that are above described but also has some disadvantages like other languages that will be described in the next article. Stay tuned with CODEXOXO.